Over the years, the consumer has become more demanding. Indeed, he is faithful to his habit of consuming a certain range of food products. However, population growth, loss of arable land and climate change complicate the task of producers and affect their ability to meet demand. Sollum Technologies, a pioneer in smart lighting solutions, is revolutionizing the industry by creating natural light recipes that can increase the volume and variety of greenhouse production and deliver it to consumers year-around.

In order to enable activity both by day and by night, artificial lighting is used to complement or replace natural light. Different technologies with basic controls, such as a switch or a conventional dimmer, are coupled with lighting systems to inhibit darkness. Although they provide acceptable lighting, artificial light, as it is understood by the public at large, doesn’t replace natural light, in particular with regard to its richness¹, and specifically its spectral content.

The light created by an HPS lamp is propagated in all directions, so 360 degrees. That’s why the device is frequently deployed in tandem with a reflector, so the light is redirected to the target growth surface.

The light emission produced by a gas-based reaction is characterized by a spectrum whose wavelengths are primarily situated between 550nm and 700 nm, which gives the light an amber color. In other words, the wavelengths emitted by a discharge lamp are specific to the gas involved and its excitation properties. For example, in the spectrum graph below, see the spectrum of an HPS lamp.

There are two principal methods for creating white light with LED technology. The first is called “phosphorus conversion,” which entails covering a blue light-emitting LED with phosphorus, whereas the second consists of blending red, blue and green colored lights.

White LEDs came about in the 1990ies thanks to the development of the blue high- power LED. The application of a phosphorescent coating on the semiconductor enables the production of a spectrum that extends to red based on the original, highly constrained spectrum of a blue LED.

Phosphorus conversion white LEDs emit a broad spectrum of light, albeit without adhering to the proportions of natural light for a given spectrum. With regard to the color proportions relative to the entire spectrum, the peak in the blue segment (located between 450 and 470 nm) compensates for the absence of light on either side of these wavelengths. Compared to the complete spectrum of sunlight, there is a significant portion of colors missing between 470 and 505 nm of the spectrum between the blue and green of a white LED – the portion known as cyan. Moreover, the presence of colors in the red section of the spectrum doesn’t conform to natural light, that is to say that daylight has a spectrum which extends well beyond that which is visible to the human eye.

As one can tell from what is on the market, white LEDs are available in different variations of color correlated temperature (CCT). The graphs below represent two examples of white LEDs: the one on the left shows a “hot” white LED that emits a light that has a greater proportion of amber and red to blue color, whereas the one on the right represents a neutral LED in which the peaks of blue and amber colors are more balanced.

After the arrival of the blue LED, other colors were developed. Changing the materials comprising semiconductors enabled the broadening of the inventory of LEDs. The combination of red, green and blue LEDs made it possible to cover the entire visible spectrum – without conforming to the proportions of natural light, however. The mix of these three sources according to different ratios produces a varied gamut of colors and white lights.

The light emission of a specific semiconductor is characterized by a singular spectrum. As stated in the previous paragraph, wavelengths specific to the materials used are emitted. The tricolor spectrum of the red, green and blue (RGB) LED is illustrated below.

For horticulture, the objective was to combine blue and red LEDs with the aim of providing the specific light absorption peaks that stimulate two receptors responsible for plants’ photosynthesis. This combination is commonly understood to be very effective in terms of converting electrical energy to light energy; however, it doesn’t

reflect the natural light with which plants grow in their native environments. It can also be unpleasant to use because it emits a pink light which temporarily disturbs color perception for the person exposed to it.

When asked about light quality, Sollum’s short answer is to point to the spectrum our technology produces. A light source that produces a spectral distribution that follows that of natural light and is equivalent to sunlight at any moment and in any circumstance can reasonably be referred to as a quality light.

In order to grant this claim, one has to recognize that despite our best efforts to establish the criteria, indicators and metrics based on a particular answer or the average observer, the evaluation of the degree of quality of a light is still up for debate and can be largely subjective or dependent on the target goal or the nature of the system that interacts with light².

On top of the red and blue combination, Sollum’s approach offers a mix of color that corresponds to natural light. Given that plants evolved in their native environments under the Sun, they possess myriad mechanisms beyond photosynthesis to develop themselves in daylight. Working inside under Sollum’s light is equivalent to working outside. It’s important to note that the comparisons made for lighting solutions were made with static spectra, whereas the control and mix developed by Sollum enable quality light for the entirety of the desired natural spectra. 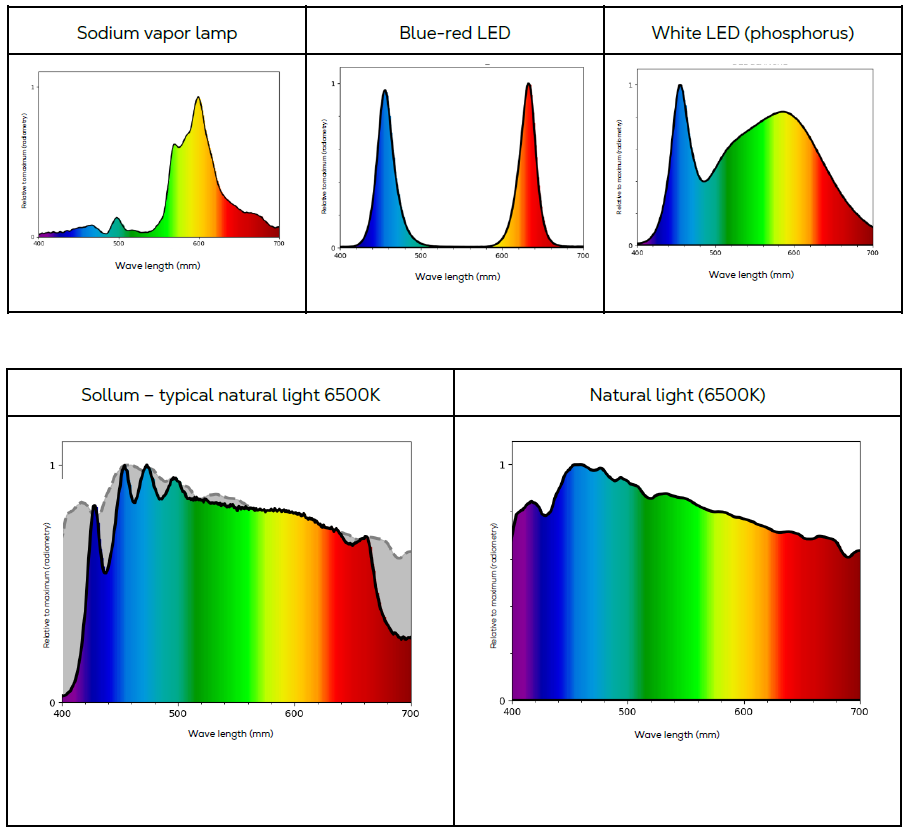 Inspired by nature, Sollum Technologies was founded in 2015 to offer greenhouse producers the only smart LED lighting solution which dynamically recreates and modulates the full spectrum of the Sun’s natural light. It is based in Montréal (Québec, Canada), where its design, development and manufacturing activities are concentrated. It works closely with its clients to create recipes adapted to the growth cycle of each product, regardless of its native climate in the world and the location of the greenhouse. Sollum’s lighting solutions thereby provide unparalleled value in terms of energy savings, productivity and superior produce quality through a flexible, adaptive and easy-to-use application, with great respect for the environment. For more information, visit sollumtechnologies.com or our LinkedIn page.